I looked at a couple of competitors, but very quickly we knew we wanted to stay with one fixture. Flex has quality manufactured products that have a good success rate in the field.”

When Trevor Miller started his job as facilities director at Santa Cruz City Schools two years ago, one of the first issues he noticed were the 2×4 surface mounted and suspended fluorescent fixtures in the Santa Cruz School gyms. None of them had protective cages.

“Having spent a lot of time in school gyms, I knew they needed a serious upgrade,” Miller said.

The lighting in the gyms was also terrible, he said. I’m guessing there were only about 20 to 25 footcandles. The district had gone through an energy retrofit in 2009 and had delamped several lights and unfortunately for gyms and competitive sports floors, that was not conducive to quality game lighting.”

Since the retrofit, 10 to 20 percent of the lamps had failed or needed to be replaced. When the fluorescents were replaced, the district had to rent 26-foot scissor lifts, which was expensive. In addition, no one took care to replace them with like bulbs, which led to slight color differences.

“I made it my mission to get the lights replaced, but given our budget constraints, it seemed highly unlikely that whole gym light replacements were going to happen,” Miller said. 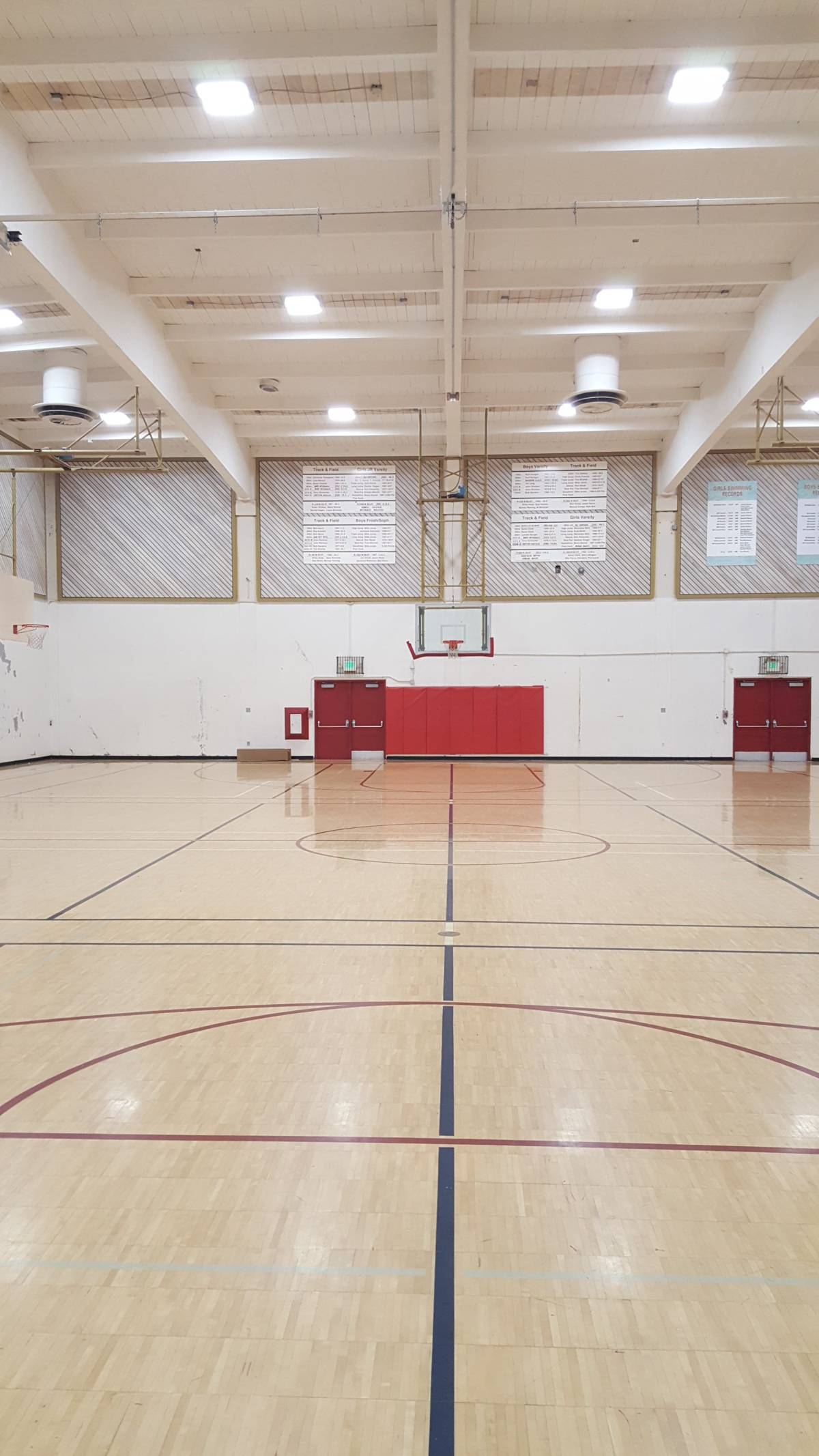 The Santa Cruz High School gym is housed in a school that was built around 1895, with the gym added in the 1940s. The high school is part of a district that educates some 7,000 students in the greater Santa Cruz area, which lies between Monterey and San Jose.

Like many of the districts identified in the “2016 State of Our Schools: America’s K-12 Facilities” study, Santa Cruz City Schools (SCCS) suffers from a lack of resources for deferred maintenance. Miller estimates that some $300 million is needed to make the ten schools that make up the district modern. Unfortunately, the district’s bonding capacity is $100 million less than that.

Sometime later, Miller discovered the Prop 39 energy grant, a 2012 successful ballot initiative which modified the way out-of-state corporations calculate their income tax burdens, and which funnels extra tax revenue towards clean energy and energy efficiency projects and the state’s general fund. In concert with a second initiative, Prop 98, which requires a minimum percentage of the California state budget to be directed to education, Prop 39 energy grants increased the amount of money flowing into education by an estimated $500 million annually.

For SCCS, that means some $1.2 million is flowing  into the district over five years for energy related projects, most of it LED lighting, Miller said.

“When I discovered the Prop 39 energy grant, I knew that would be a great funding source to help make the gym lighting happen,” Miller said. “Then I got connected with AMBAG, which works with PG&E, and they did our energy surveys and analysis and got us on the right track.”

Stephen Campbell is the special projects associate with AMBAG Energy Watch, a joint program between The Association of Monterey Bay Area Governments (AMBAG) and Pacific Gas and Electric Company (PG&E) to reduce energy use in Monterey, San Benito and Santa Cruz counties. In this three county region, AMBAG Energy Watch has successfully developed 25 Prop 39 energy plans and is working with over 140 individual schools to implement energy efficiency measures in the region. Campbell worked with SCCS to provide AMBAG Energy Watch’s full suite of no-cost Prop 39 services and developed SCCS’s Prop 39 energy plan. SCCS contracted with the California Conservation Corps to provide no cost labor for the gym lighting project.

“The CCC helps us stretch Prop 39 energy grant further and these kids have an outlet to learn and grow, so this is a wonderful collaboration,” Miller said.

The $121,000 gym lighting project for the five schools, when Prop 39 funds, PG&E rebates, and low cost CCC installation are factored in, cost the school district nothing. Miller said given the gym safety issues and no cost, it was not hard to get approval for new lights despite the earlier retrofit expenditure. The district installed 189 Flex Lighting Solutions Essentials LED High Bay Light fixtures, which Miller said he chose based on recommendations from his peers and Campbell.

“I looked at a couple of competitors but very quickly we knew we wanted to stay with one fixture,” Miller added. “Flex has quality manufactured products that have a good success rate in the field.”

Peers told Miller about performance issues with other LED lighting manufacturers and the painful process some had gone through having to validate performance specs and then spend more money increasing the number of fixtures to meet districts’ basic requirements. “Flex came to the top every time,” Miller said.

Miller and Campbell worked with Troy Vaughn, business development manager for Lighting Systems, which represents Flex in Northern California and Western Nevada. Vaughn measured the sites and had his team create lighting layouts for the selected fixtures and insured accuracy of the luminaire choices. He also worked with the Flex team to insure an expedited delivery of the fixtures for an early June installation.

Two lifts were delivered to the district’s flagship high school June 13. After giving instructions and training to the five CCC young men, they went to work removing existing fixtures, four 2-by-4 surfaced mounted metal boxes and replacing them with one 2-by-2 LED fixture. After completing Santa Cruz High School, they moved to the other schools.

It’s beautiful lighting that’s perfect for the application; it’s going to be energy efficient, and the fixtures are small, so they will be a lot harder to hit. We’re greatly reducing our maintenance costs and it’s all being paid for without a dollar coming out of the district’s pocket.”

“It’s a cliché, but the difference is night and day,” Miller said of the new LED lighting. “I have a feeling that the coaches are going to think the gyms are way over lit and complain that it’s too bright.”

Miller expects to save 73,326 kWh of energy from the gym project annually, which will save the district $14,655 a year. Once additional exterior and interior lighting projects are completed in the next year or two, he expects to save $82,000 a year or some $440,000 in five years, a figure that includes operational savings.

“These changes truly alter the lighting situations; brightens them and brings life back to these older facilities in a way that we couldn’t do without this funding,” Miller said. “It’s beautiful lighting that’s perfect for the application; it’s going to be energy efficient, and the fixtures are small, so they will be a lot harder to hit. We’re greatly reducing our maintenance costs and it’s all being paid for without a dollar coming out of the district’s pocket.